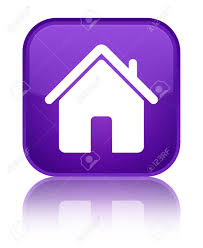 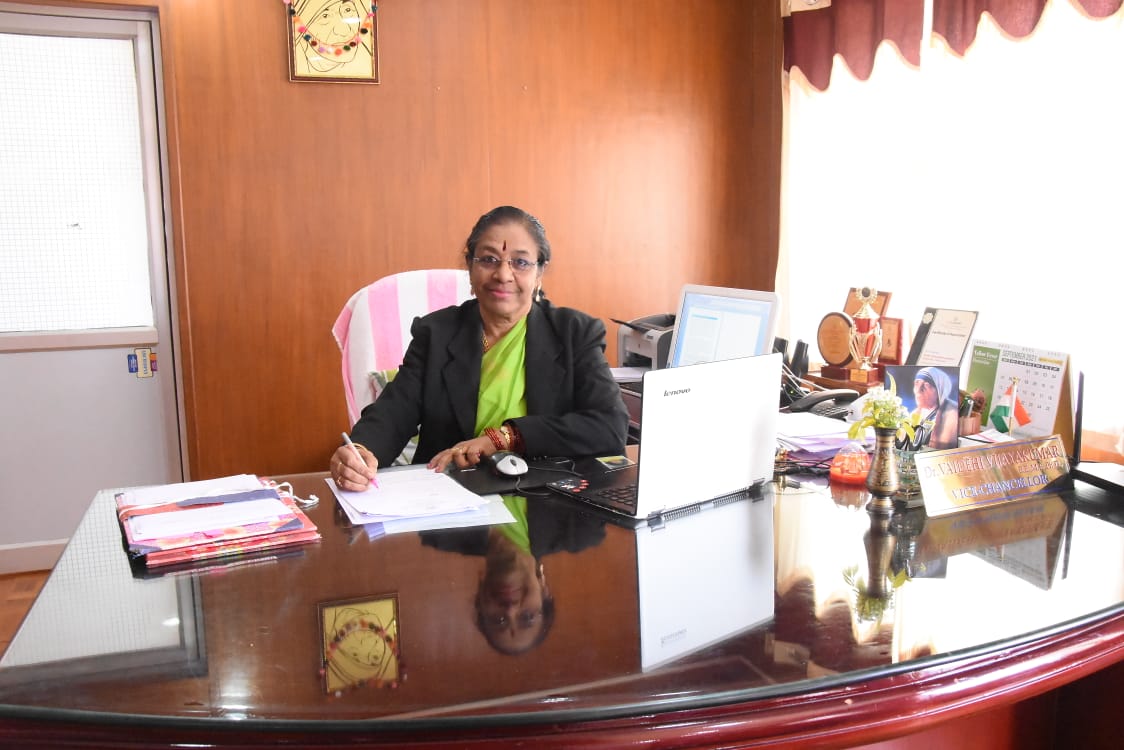 From the Desk of the Vice Chancellor,

Present Education System places greater responsibility on teachers: to educate, train and guarantee job for the students. Women as teachers can reveal a lot of facts and help determine their influence on education. In an excellent working condition, woman teachers can contribute to the development of girl-education and the community. Teachers, especially, woman teachers are important catalysts for women empowerment- in building a positive self-image for girls, promoting self-awareness, effectiveness and strengthening them to fight for their justice. Women as teachers can create in young learners an appetite for bringing about positive change in all areas. Established in 1984, under the Act 15, with the lofty vision of “Women Empowerment through Education” by the then hon’ble Chief Minister Thiru. M. G. Ramachandran, Mother Teresa Women’s University (MTWU), has been rendering a Yeoman service in ennobling women of all social strata, especially the tribal and the most downtrodden women through higher education. The University has the pride of being the first Govt. Women’s University in the State and the third in the Nation. Mother Teresa Women’s University, whose foundation stone was laid by the legendry Nobel Laureate for Peace St. Mother Teresa, has been playing a catalytic role in building an inclusive nation through empowered women.

MTWU with its distinctive feature -- a University for the Women, by the Women, and of the Women – cultivates woman learners as powerful decision makers and capacity builders to shine as potential global leaders. Situated on the lap of the Princess of Hills, Kodaikanal, which is a Multicultural Tourist Centre, and equipped with the State of Art facilities, MTWU provides a conducive ambiance for academic and research pursuits. MTWU has widespread its strong wings at Madurai, Chennai, and Coimbatore with its Research and Extension Centres for encompassing woman aspirants from all over the State. The University also enables the students, rural women and the destitute to shine as employers rather than being employees, through its Entrepreneurship Training Centre at Pallapatti, Dindigul.

I am proud to state that the staff and the faculty of MTWU are highly competent and passionate in rendering their academic and administrative services with focussed mind. It is with their collective strength that MTWU is taking its strident steps towards the attainment of its broader vision and mission.

Besides imparting the domain knowledge and different skill sets, the faculties play meaty role in nurturing the holistic personality of our stakeholders. I am confident that becoming one of the top-notch Universities at the global level is not a far-off dream, because of the strong support of the intellectually resourceful faculties and the 100% co-operation of our dear parents and other stakeholders, who encourage us with their valuable and constructive suggestions. Let us strive, seek, and achieve. 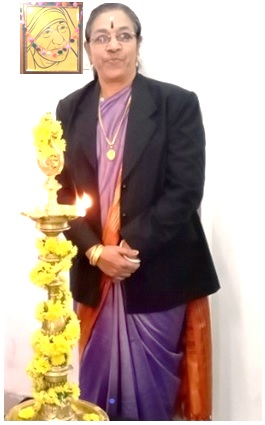 Dr.Vaidehi Vijayakumar, renowned Academician and Researcher with 38 years of academic experience, did her SSLC at Christ King High School Tambaram, PUC at SDKNB Vaishnav College Chromepet, BE in ECE at College of Engineering, Guindy, University of Madras, ME in Applied Electronics at Madras Institute of Technology (MIT). She did her Ph.D in “Scheduling Algorithms for Multiprocessor systems and their applications to the Kalman-Tracking algorithms” at MIT, Anna University, Chennai. She underwent advanced training in Multimedia Networking at Ryerson University, Toronto, Canada. She started her career at Indian Institute of Science, Bangalore in 1980 as Scientific Assistant in School of Automation and Computer Science and joined Madras Institute of Technology in 1982 as Lecturer in Electronics Department. She played a major role in setting up Computer Centre at MIT, Department of Information Technology and Department of Computer Technology at MIT. During her service period in MIT from 1982 to 2016, she had taken up several administrative responsibilities such as Head-Computer Centre, HoD-Information Technology, HoD-Electronics Engineering, HoD-Computer Technology, Chairman-Faculty of Information and Communication, Anna University, and Director-AU-KBC Research Centre. After her superannuation from MIT, she had served as Senior Professor and Dean, at School of Computing Science and Engineering, VIT, Chennai. As HoD, she has taken steps to make Electronics Department in MIT to become QIP recognized research department.

During her tenure as HoD, both Electronics and IT department of MIT received funding from DST under FIST and from UGC under DRS-SAP. She played a key role in setting up Parallel Processing Lab and Sensor Networks lab in MIT. She had executed several funded projects as a Principal Investigator which are very useful to the society such as “Intelligent Remote Health Monitoring System (IRHMS) in Sensor Cloud Environment”, funded by DST. IRHMS is very useful in remote healthcare. The project on “Face Recognition System with video analytics” funded by BRNS recognize faces in video under uncontrolled environment. The project on “Complex Event Processing for Sensor Network” funded by DST-NRDMS is very useful in detecting abnormalities in vital parameters in real time. “Parallel Processing Solutions to Adaptive DSP algorithms funded by AICTE had reduced the execution time of the time critical ADSP algorithms. She was a Task Team Member of Anna University Micro satellite ANUSAT in “Development of a Store and forward payload software” funded by ISRO. She was Co-PI in the project on “Real-time GPS Signal Simulator” funded by AR&DB and DoE, “Studies on tracking algorithms for Ship-borne Radar” funded by LRDE. She was a Co-PI in National Resource Centre –Free Open Source Software (NRC-FOSS) project funded by MCIT in training teachers in FOSS. She had executed consultancy projects with TCS on Power Optimization in Sensor Networks and Multi Sensor Image and Data Fusion.

The outcome of this project has given solution to Tailgating problem.The funded project with Xambala inc on “Intrusion Detection and Semantic Query Processing” has reduced the execution time in the target processor. The consultancy work with Ericsson analyzed the Firmware part of Ericsson Switch architecture. She was a Dual Degree co-ordinator and taken steps to offer IT course to non-IT branch students.

As a Chairman of Information and Communication Technology, formulated curriculum and syllabus to enhance the placement opportunities for students.As a placement officer of MIT, she helped the students in getting placements. She has organized several international conferences ICSCN 2007, 2008, ICRTIT 2011, 2012, 2013, ICoAC 2011, ICRTAC 2018 and National conferences NCSET 2016, 2019. She has organized several workshops, seminars and Faculty Development Programs for the benefit of students and faculty.

She has guided 25 PhD scholars, and published 101 reputed journal papers and 266 conference papers and 4 book chapters. She is the recipient of Active Consultant Award from Anna University in 2011, Faculty Award from Microsoft on 22.07.2011, Certificate of Achievement from Anna University for the successful launch of ANUSAT in April 2009. She received ACU (Association of Commonwealth Universities) Fellowship to visit Universities in Singapore and Malaysia for a period of 3 months during April-June 1995, 12 Best paper awards in reputed international conferences, Research Award from VIT University in 2018, 2019. She made technical visits to USA, Canada, UK, France, Australia, Singapore, Hong Kong, Malaysia, Dubai & Thailand , delivered Seminar talks and presented papers. She is the Senior Member of IEEE, Fellow of IETE, Life member of ISTE, CSI. She is a member in Women Empowerment and Women in Engineering. 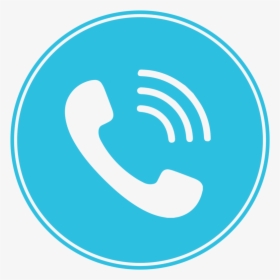 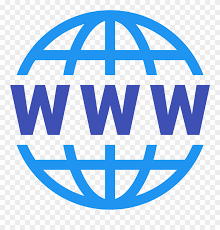 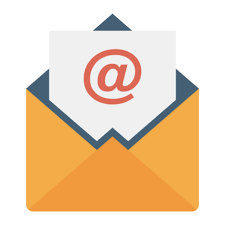